There’s a lot of stuff you can’t control about a parade. The weather. The firetruck (whether it shows up). The spectator attendance. But then I found a whole new level of “out of my control”…Â we got word that the plan was to resurface Main Street.

Grinder. Sweeper. Jackhammer. Paver. Roller. All of it.Â All 5 lanes.

Courtney made some calls. First we were told we’d just have to deal with it, that the machinery, cones, workmen, dust, debris and noise would be there. Certain city employees wanted us to believe they’d done all they could and the parade just wasn’t important enough – that we’d have to walk in whatever conditions were there. Clearly they didn’t care, so Courtney made more calls. While waiting for those calls I emailed people to pray. Despite all my planning skills, I was again brought to the point of prayer (for those of you who have been reading the blog for a while, this theme keeps coming back when I plan something… like here and here)

The calls were returned, the prayers were heard, the project leader was kind and patient and VERY understanding. He delayed. He assured us there wouldn’t be anything construction related. Â This week they started the resurfacing. I took a couple pictures with my phone, while sitting at stop lights or in the traffic. THIS is what we could’ve been parading through 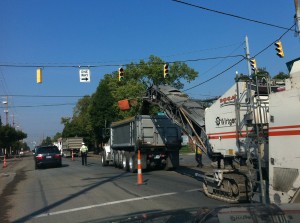 Â And instead, they delayed, the cones were gone, the trucks weren’t around, the surface was not yet ground up. So we got this

Yes – even the fire truck showed up.

So finally, nearly a year after writing the grant, it happened. Children, Youth, Adults and organizations from all over our neighborhood took over Main Street. A giant celebration of that which is good and healthy about our community!

I was at the back. From my vantage point, taking over a MILE of Main Street looks like this.

Can you see that blue sky? It was downpouring an hour before.

And of course, I’ve written lots about Courtney – so here we are, at the back of the parade. I’ve been so blessed by her help, her care for our community, her determination to fight for it and love the people here. When you work in a place where everyone is focused on the bad things to “fix” it’s nice to not be alone in seeing the positives and potential.

So what did I learn? To get everything in writing, and to pray.
The reality is that we aren’t alone. I’ve known for years that God cares about the people in our community. But this weekend, this event, with the rain stopping minutes before the crowd gathered, the right people listening to us and having compassion, the number of volunteers and participants that showed up, it was clear to me again that God is moving, that he cares, that he will defend a celebration for those who need one.
My God Cares